The Seth Godin’s fear of shipping I post is a short version prepared from this post. When I read the Seth Godin reference in Andy McIlwain‘s Content Creator’s Toolbox presentation, I said to myself “Wow, that’s me.” I looked at the variety of things I’d written in the last few weeks and realized for the umpteenth time that it was a treasure trove and that I must resume publishing in earnest. 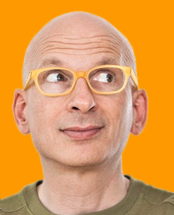 … thinking that everything you produce is going to be a big hit? That’s a mistake. Obsessing over every little detail? That’ll slow you down. Worried that it won’t be good enough? That’ll stop you entirely. I know the feeling, though. It’s probably the number one reason I don’t write more on my blog. I worry that it won’t be good enough. I worry that others will judge me poorly for what I create. Seth Godin calls it the fear of shipping. But, the thing is, we can’t stop ourselves from shipping, from creating content. It needs to be done.

I can’t imagine a quotation or precept more applicable to me than that. I’m chagrined. On the other hand, I recognize and derive great solace from the fact that this is endemic to all creative activity. In short, everyone fears ridicule, disappointment and criticism. “Shipping” is an invitation to all three. Moreover, where the deadline is arbitrary, the fear is compounded. The best way to overcome it is …. Well, there isn’t a way. It’s a condition and overcoming it today has no real likelihood of reducing it tomorrow. The only thing that can be accomplished is to blunt its impact through repetition. Shipping leads to more shipping which leads to more shipping and so on. You see what I mean. That doesn’t make for a compelling argument. So Godin brings in the lizard brain. 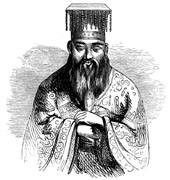 Turns out that fear of shipping is just a marketer’s reformulation of aphorisms that date back to the 1600s in the western world and the time of Confucius (“Better a diamond with a flaw than a pebble without.”) in the east. So this could be a story about how a clever marketer goes about developing meme as part of the development of his personal brand. Godin targets our “lizard brain” as the source of these primal doubts. “… our job is to figure out how to quiet it and ignore it.” S: Quieting the lizard brain | Seth’s Godin. The lizard brain or amygdala enables us to react almost instantaneously to the presence of a danger. It’s the super fast reaction of our natural alarm system. S: The Amygdala And Its Allies | The Brain From Top To Bottom. 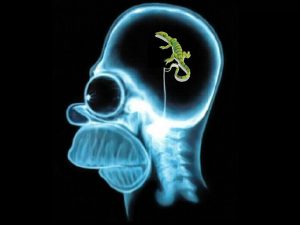 At 11:15, he refers to the lizard brain in terms of its influence in expressing our fears and doubts, a fanciful and colorful bit of pure nonsense. Everything in and about the lizard brain is automatic, autonomous and reactive. That’s why it works. It can’t be shut off. So what he means but doesn’t say is that you learn to live with the fear and to overcome it by simply refusing to behave fearfully. Recall what people say about bravery. It isn’t because a person doesn’t feel fear. Everyone does. It’s what you do about it that matters. A key part of Godin’s argument is that we sabotage ourselves. That is much better because it means that we are doing something that we can stop doing. Wrong. The fear is the recognition of danger, risk and uncertainty. The presence of those conditions means that the fear is at least in some sense, an appropriate response. He refers to overcoming “the resistance” of the lizard brain. He has endowed it with all kinds of capabilities including resistance and telling us what to do. Creative activity by its nature involves taking chances of one kind or another. His point, “Seth Godin calls it the fear of shipping.”, is excellent and definitely applies to me. The 2010 post does refer only to shipping and so I wonder whether Andy saw the analogy to writing or someone else. That post is 175 words.2016-08-08 “fear of shipping”: 240k results. “I’ve had many many many products, the vast majority of the things I’ve written, or created, the organisations I built fail, but the reason I’ve managed a modicum of success is because I just keep shipping.” — Seth Godin. S: Fear of Not Shipping | Medium and attributed to Quieting the Lizard Brain | Seth Godin (Vimeo). Steve McConnell‘s book on software management and the concept of thrashing is cited by Godin. He says that thrashing is expensive when it occurs at the end and inexpensive at the beginning. Godin doesn’t define thrashing or use it in a content in which its meaning is obvious. This is a weak argument. Over simplified, thrashing occurs when an OS is devoting more resources to managing the work than it is in performing it. In The Power of Process, he refers to thrashing as unproductive work. In software development, he argues that controlling changes systematically usually occurs late in a project and should occur at and from the beginning. In the video, He refers to the 37Signals guys writing about the secret to shipping on time and on budget — when you run out of money or time, you ship. See a larger version of the quotation in When you run out of time or money, ship | Andrew P. Gordon. The quotation attributed to Woody Allen, “Eighty percent of success is showing up.” (See Showing Up Is 80 Percent of Life | Quote Investigator.) Another one is from the game of hockey, “you can’t score if you don’t shoot.” (sources) Similarly, “You miss 100% of the shots you don’t take” is a famous hockey adage that’s usually credited by Wayne Gretzky, a Hall of Fame player. S: The Big Apple: “You miss 100% of the shots you don’t take” (hockey adage). The perfect is the enemy of the good. Perfect is the enemy of good is an aphorism, an English variant of the older better is the enemy of good, which was popularized by Voltaire in French form. Alternative forms include “the perfect is the enemy of the good”, which more closely translate French and earlier Italian sayings, or “[the] perfect is the enemy of [the] good enough”. Similar sentiments occur in other phrases, including from English, and are all attested since around 1600.Perfect is the enemy of good | Wikipedia. Returning to his presentation, at 0000, he explains why the resistance to shipping — getting stuff finished and despatched/published/released— is just another symptom of our lizard brain at work. Another concept Seth Godin raises in his presentation is one of Steve McConnell’s: thrash early. “Thrash at the beginning because thrashing at the beginning is cheap.” In this context, “thrashing” means working without making any progress. The expression was coined, I believe, by Frederick Brooks, in The Mythical Man-Month where he described great beasts, long since extinct, that had strayed into a tar pit, thrashing about with all their might but not making any progress to escape their predicament. S: It’s not about writing … it’s about shipping | ITauthor “… unfamiliar tasks rekindle the fear of shipping.” S: The Neverending Fear of Shipping | Andy Adams. “I like Apple for the opposite reason: they’re not afraid of getting a rudimentary 1.0 out into the world. … if you’re not embarrassed when you ship your first version you waited too long.” S: 1.0 Is the Loneliest Number | Matt Mullenweg. He goes on to say:

Usage is like oxygen for ideas. You can never fully anticipate how an audience is going to react to something you’ve created until it’s out there. … I must not fear. Fear is the mind-killer. Fear is the little-death that brings total obliteration. I will face my fear. I will permit it to pass over me and through me. And when it has gone past I will turn the inner eye to see its path. Where the fear has gone there will be nothing. Only I will remain. S: Frank Herbert, Dune.

A fitting note on which to end this post.

Posted in General and tagged Godin, McIlwain, quote
← Gerry McGovern on why the old model of users in the enterprise is kaputData Markup Strategy for SEO presentation, 2016-11-23 | WordPress Toronto Meetup →

Robin Macrae is a Toronto consultant in content management and collaboration for Fortune 500 companies, government agencies and SMBs with deep experience in SharePoint and WordPress. Read more …